Orr at the Vex Robitics Olympics! 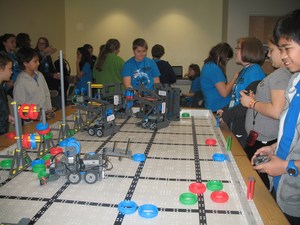 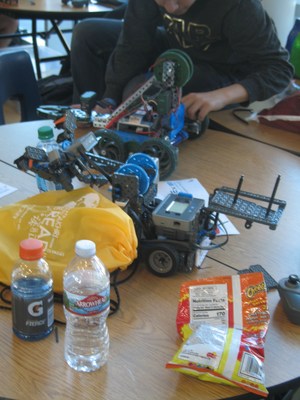 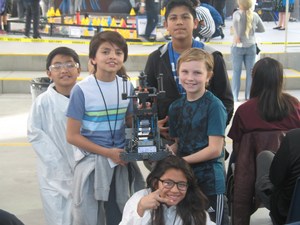 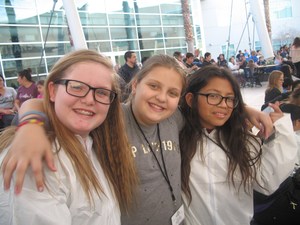 At the 2018 Vex Robotics Olympics, teamwork is a vital key to success. Our teams worked on programming robots, having them work autonomously, and a STEM research project. The best part is competing in front of hundreds of people and trying to do your best.

There were other activities teams could play while waiting for their turn to compete. There was a forklift simulator, marshmallow tower building contest, safety challenge, and 3-D games.

Going to the competitions at Faith Lutheran and East Career and Technical Academy was fun. We hope to be on the robotics team next year.
In robotics I had loads of fun!  It was an overwhelming experience and expedition.  My team and I build a robot that worked very efficiently.  We had a chance to modify it, so we did!  It was a great choice and it was essential.  Robotics was incredibly stressful but also extremely exciting and satisfying.  We had an outstanding teacher, MR. Hurst, that guided my robotics class to become one step better at robotics.  Without my friends I would not have gotten anywhere.  We made it to the finals and go 5th! Just a fantastic experience; no other words.
Student M.
My experiences being at the two schools, Faith Lutheran and East Career Technical Academy, were very cool because being there was such an honor.  It was also nerve wrecking because I was playing in front of hundreds of people and trying not to disappoint my team.  There were different activities we could play while waiting for our turn.  There was the forklify simulator, marshmallow tower building, safety challenge, and 3D games.  It was very fun and funny.  I hope to be in the robotics team next year.
Student J
At the 2018 Vex Robotics Olympics, we learned that teamwork is a vital key to overall success.  We found it an engaging experience.  Personally, I worked on the autonomous portion of the Vex IQ robot with 3 other teammates.  It was my least favorite thing because the programming was a long process however it taught my fellow teammates and I that hard work leads to triumph.  I was also a part of the Vex EOR competition which used more advanced parts as opposed to Vex IQ.  Even though we were new to everything and didn't have as much time as the other teams we also participated in the STEM research project portion of the competition.
Student C
I was in robotics.  I believe robotics was a fun experience and when I was in robotics I learned a lot of stuff.  When we went to a practice competition I think that was a way to help us learn how to drive and other things with the robot.  Then we went to the real competition.  There were a lot of people there.  I was going back from watching people drive and practicing.  I also went to one of the activities, like the safety activity.  I got to put on a safety suit and use a computer program with a special pen to complete tasks.
Student L